This year’s show was slated a ‘major’ air show with the Navy Flight Demonstration Squadron called the Blue Angels scheduled to appear. However, the Blue Angels temporarily stood down, canceling three weekend shows following a crash on June 2 during a practice in Smyrna, Tennessee. Marine Capt. Jeff Kuss was killed. Capt. Kuss’ aircraft was number 6. 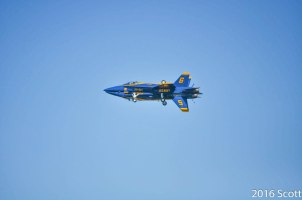 The Team will return and will fly a five jet demonstration in Traverse City. The performance, as usual, will feature ‘Fat Albert’, the Blue Angels C-130.

This air show was located at the Vero Beach Municipal Airport located in SE Florida. According to their website, the Vero Beach Regional Airport is a public-use general aviation airport with FAR Part 139 certification. The airport maintains three lighted runways, which handle approximately 185,000 annual take-offs and landings. Aircraft range in size from small general aviation aircraft to large corporate jets.

The airport is home to four full-service fixed base operators, which ensures that the needs of the aviation community are promptly met. Some of the services they offer include aviation fuel(100LL, Jet A), aircraft storage, flight planning, catering, car rental, charter service, avionics repair, aircraft parts, airframe and power plant maintenance, as well as auxiliary power units.
Although the F/A-18 Super Hornet was the main event, there were many other high performance, exciting and thrilling flight demonstrations put on by world record holders in speed and aerobatics. Top names include; Rob Holland, Mike Goulian, Kyle Franklin, Greg Shelton & Wing Walker Ashley Key,  John Black,  Jacquie ‘Baby’ Warda, Aeroshell Aerobatic Team and the Misty Blues All Women Jump Team. And to wrap the show was an incredibly fast semi-truck called ‘Shockwave‘! Oh boy was she fast. Powered by not 1, not 2 but 3 jet turbine engines….the fasted truck in the world.
Shockwave is a custom-built race truck equipped with 3 huge J34-48 Pratt & Whitney Jet Engines originally out of the USA Navy T2 Buckeye.  The combined horsepower is 36,000!  These 3 Jet Engines make a total of 21,000 lbs of thrust which easily propels this truck to speeds over 350 mph. Owned by Darnell Racing Enterprises, Inc. Impressive! A must see.

The crowd ew’d, ah’d, clapped and cheered at every maneuver! Non-stop action for each routine. Daring would best describe all the aerobatics! The show was choreographed so that teams were taxiing by the crowd as one team performed and another returned. Always parading by the crowd for photo ops as the pilots waved.

The HEADLINER  was the F/A-18 Super Hornet (photo below) tactical fighter aircraft manufactured by Boeing Defense . It’s a single seat, carrier landing, multi-role jet.  It is powered by 2-General Electric F-414 turbines. It’s top speed is 1,190 MPH and can cruise for over 2,000 miles. 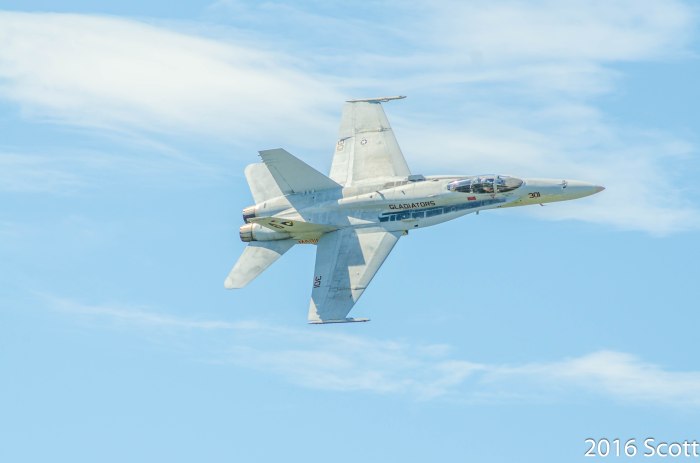 During the demonstration, Lt. Keith performed a slow pass (actual photo below) where his forward air speed went down to ONLY…….109 MPH. Additionally, Keith performed 4 point rolls, inverted passes, vertical climbs, full after-burners, hard bank-high G force turns.  During the slow pass Lt. Keith was piped into the crow through the, I say excellent, public address system calling off his air speed until he slowed to 109 MPH.

Attending these shows never gets old. Ages ranging from new born’s to WWII and Vietnam War Veterans. The Vietnam Veterans’ Color Guard presented the flags during a driving thunderstorm, demonstrating their courage and determination….and RESPECT! Such dedication to their country.
One final note is that Piper Aircraft, Inc. headquartered in Vero Beach, showed off their newest aircraft that just received air readiness certification from the FAA on June 16, 2016. This was one of the first public photo opportunities for the M600.