Having the privilege to attend this event for the first time my initial take-away is the passion that the attendees have for aerospace and human exploration. Many in the room have taken significant risks to explore outer space and those who get them there are on a common mission.

ERAU Scholarly Commons is an open access digital repository of the intellectual output produced by the faculty, students and staff of Embry-Riddle Aeronautical University. By collecting and preserving the University community’s research in a single location, ERAU Scholarly Commons provides a digital showcase for campus publications, archival materials, library special collections and other University-related creative works not published elsewhere. For more information, please contact the Coordinator.

The Tuesday night Gala was kicked off with the USAF Color Guard from Patrick Air Force Base. 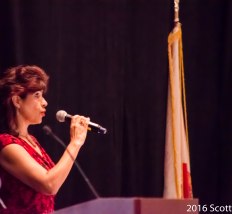 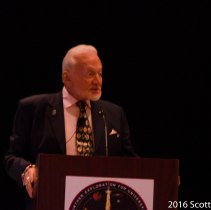 “What you are doing is a lot easier than landing on land” to SpaceX on Drone Ship landings.

Rob Cabana’s quote of the night…”I was working for John Young when I started”!

“Achieving the Impossible and Cycling Pathways to Occupy Mars” was the theme for Buss Aldrin’s presentation. This following is a graphic depicting the vision of the Buzz Aldrin Enterprise to occupy Mars.